A few pieces recently glazed from fruit forms I was working on last year. I'm pleased with the "rubbed down" turquoise and the matt blue is a good match in both colour and texture for "blue-skinned" squashes (Blue Hubbard, Crown Prince).

I'm hoping to make more of the mottled green this matt blue produces when applied thin (see last photo). The plan is to use this organic effect on very geometric pieces I'm producing at the moment. 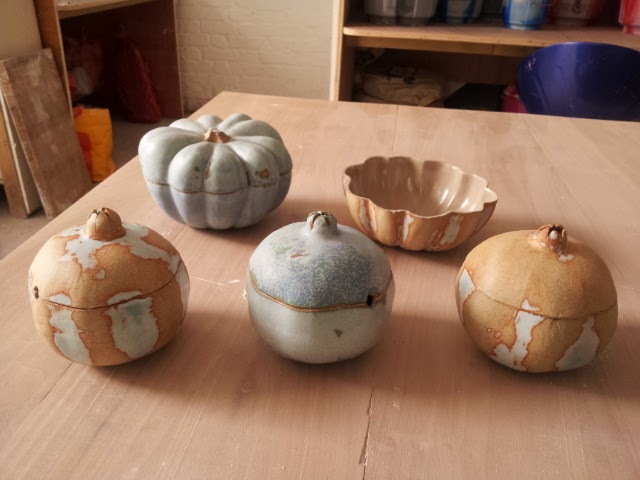 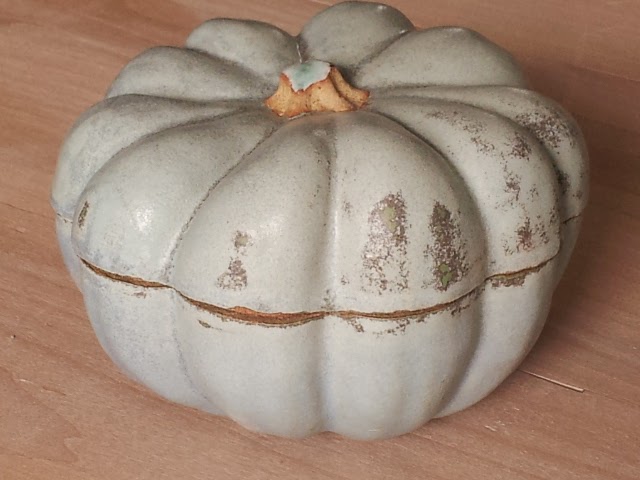 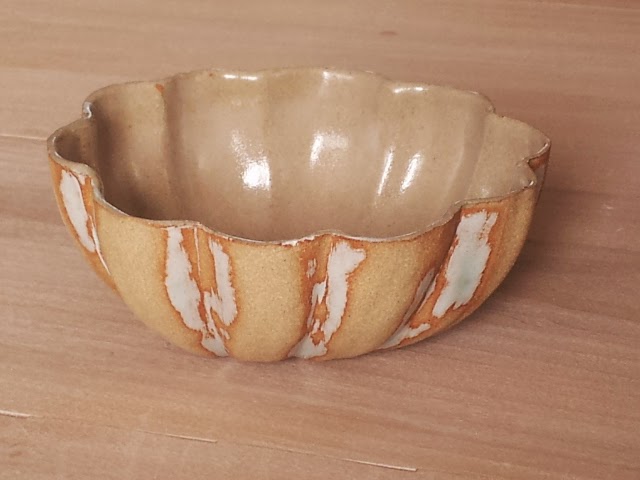 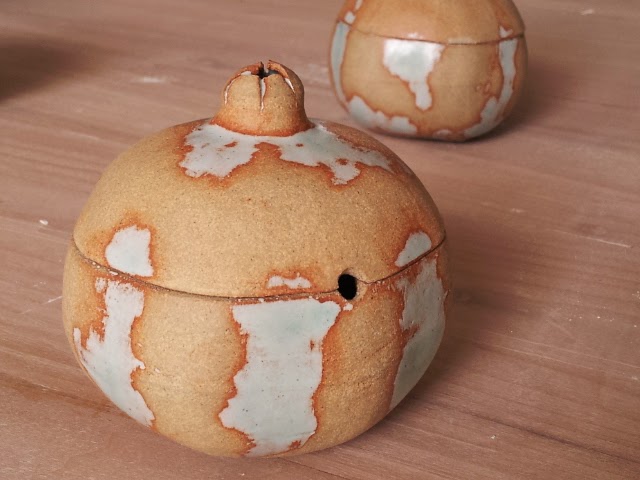 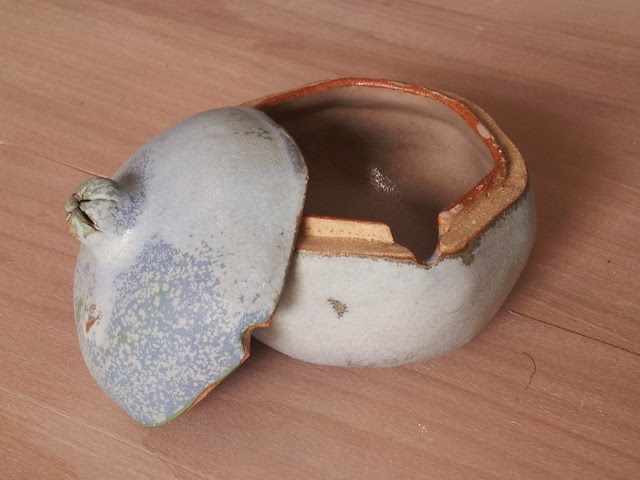 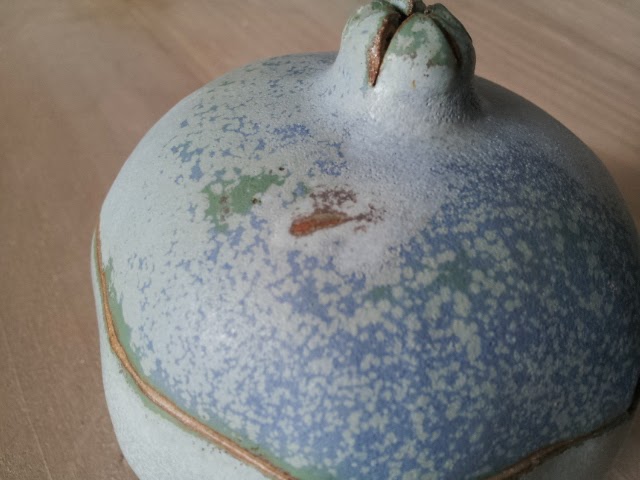 I was on fire!

"If a thing's hard it's probably not worth doing." is one of my favourite Homer Simpson mottos. I simetimes feel I am following the opposite and equally absurd tack - doggedly persisting with something despite a seemingly impossible challenge.

It's not that I assume that the effort guarantees a worthwhile result - it's more that I have a clear vision of the product but have yet to perfect the technique for producing it to a high standard but with optimum effort.

A case in point is the "molecule" model seen here prepared for the first section of a mould to be cast in plaster. (This was my second attempt to construct the "shuttering" - a previous attempt using clay went pear-shaped.. yes, literally).

I've spent time in the studio nearly every evening this week, delighted with some work as it emerged from a glaze firing, disappointed with others.

I have leapt spontaneously into making new pieces and pushed on to complete some that have been waiting on the shelf.

I have put three pieces in a new material (Egyptian Paste) into a firing; I'll see how they turned out before I go in to work tomorrow!

Finally yesterday I made a model and cast a four-piece mould around it within a matter of hours. I was on fire! - we'll see whether the results were worth the effort when the smoke clears.. 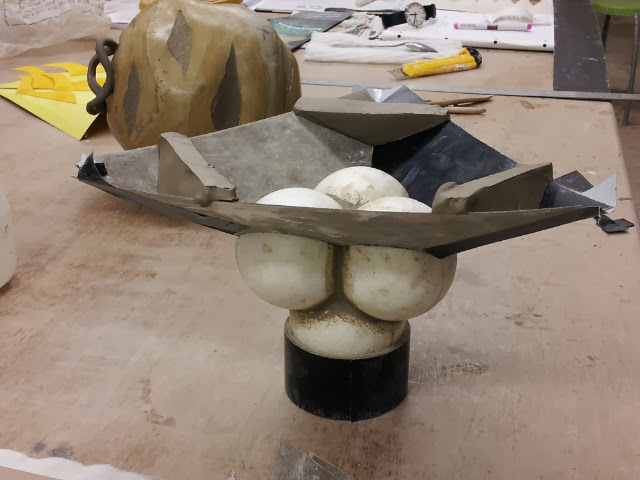 A few pots just out of the kiln. Watermelon pots - the insides are the dolomite-based Rhodes White. "Heat Sink" beakers for hot toddies and mulled wine - the ridges are to save hands overheating and give better grip for gloves. Mugs; one fired, one unfired showing the amount of shrinkage - still a good size for a brew! 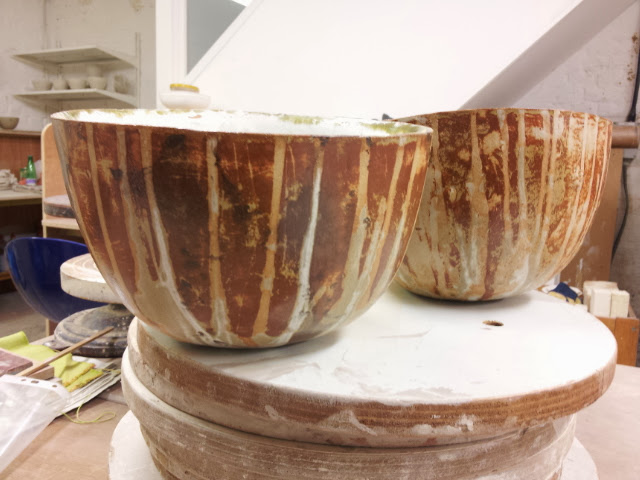 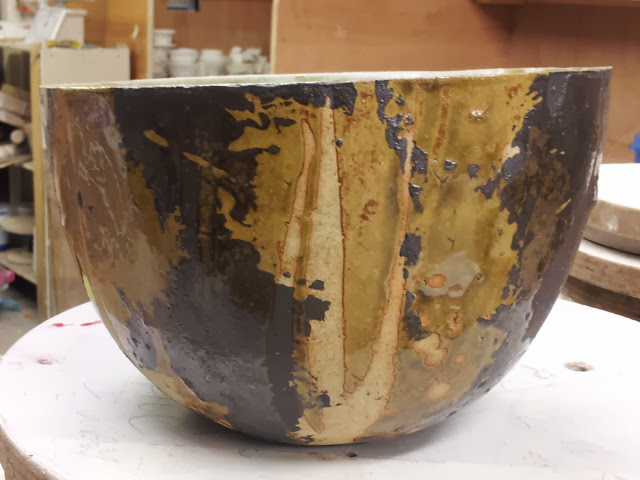 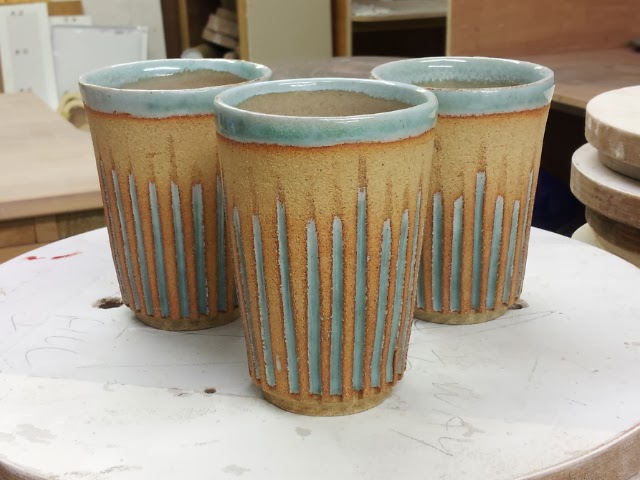 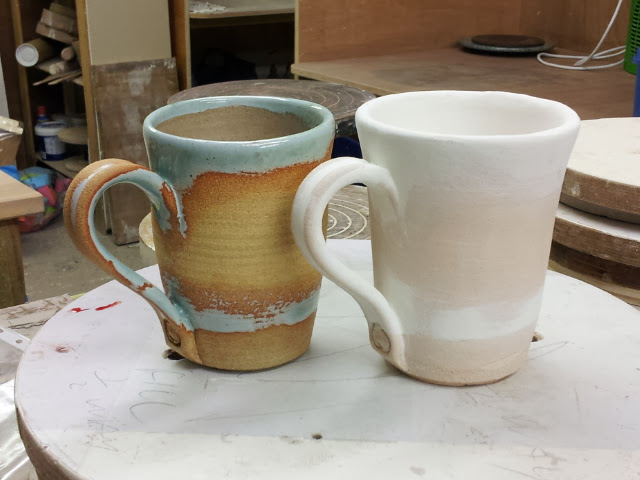 Here are some recent work in progress. Still enjoying the generous forms of cultivated food plants - complete watermelon  lidded vessels.
More recently I found this purple Kohl Rabl. It's a member of the brassica (cabbage, cauli, sprouts etc.) KR was developed for a swollen stem which can be be peeled, chopped and eaten raw or cooked.
I was fascinated with its tendency to spherical form, heavily interrupted by the graphic scars of leaf joints. 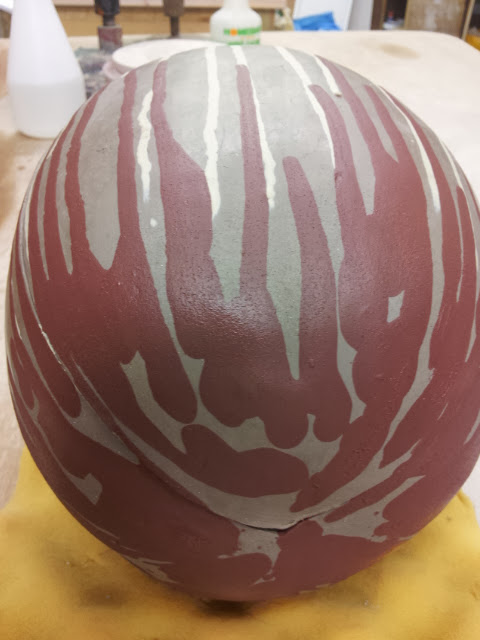 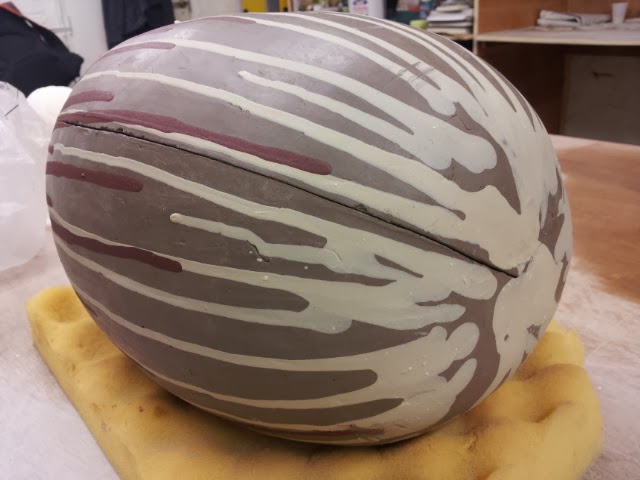 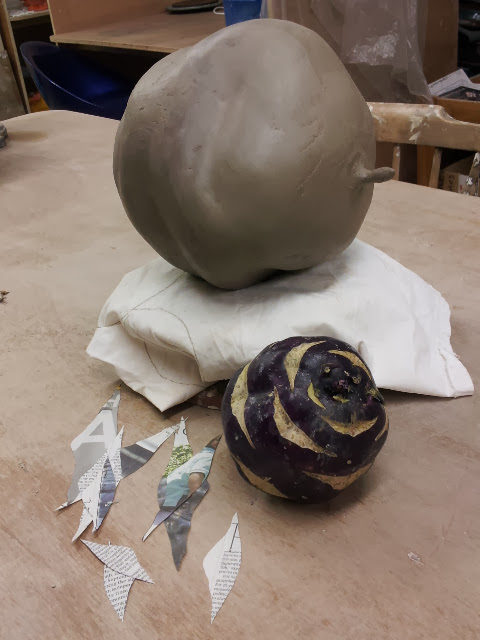 ..started with a bang! Private View night was like a damburst, with an explosion of well-wishing, curious a complimentary friends flooding the hitherto sepulchral confines of the studio!
It was great to be able to show colleagues the fruits of my labours of the past month-and-a-half and to hear their expressions of surprise ("It's much smaller than it looked on the website!" "Wait 'til I tell my mum, she's mad about watermelon." "We knew you were clever but we didn't know you were an artist!").
And it was a treat to welcome friends I have been out if touch with for a while.
The refreshments lubricated the loco without sending it off the rails. Personally I didn't get the chance to drink too much, so happily engaged as I was in catching up, explaining the work, reminiscing and batting ideas around.
The evening flew by and as the last of my guests left I was happy to be making tracks for home, unlike my studio buddies who stayed on to burn the midnight oil.
There was busy weekend ahead.

The second batch of work is out of the kiln showing little sign of last night's High Anxiety and many Watermelon pots looking bonnie indeed! 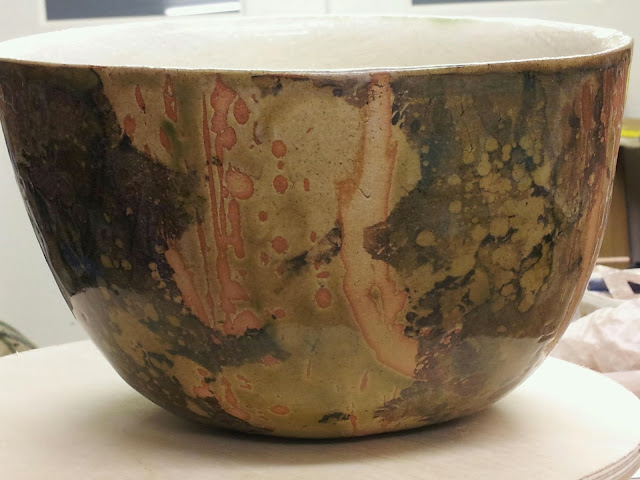 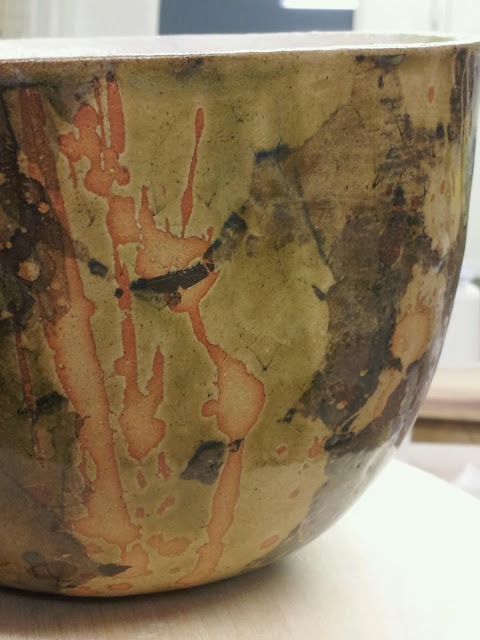 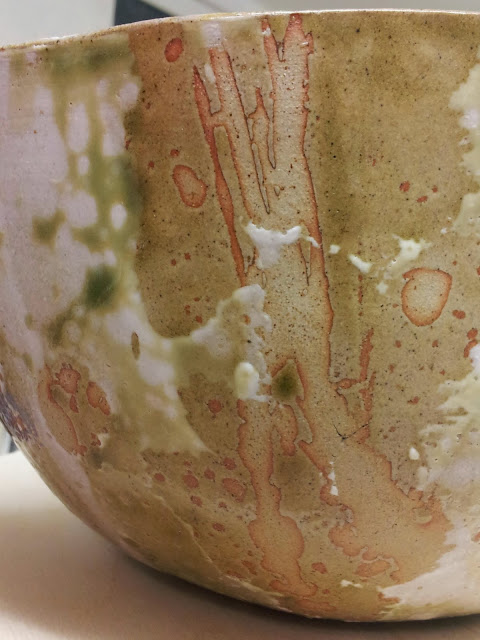 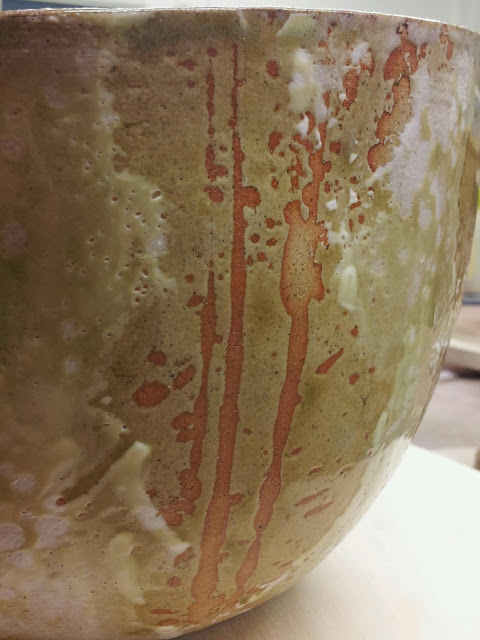 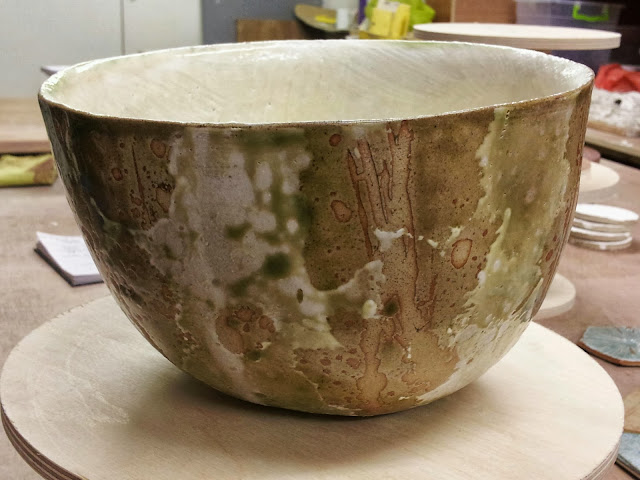 It seemed like ages waiting for the kiln to cool to 60 today.. But it was worth it I am very happy with the 3-colour and graduated toasting on the Cantaloups! Black slip (on tall  vases is subtly metallic/graphite and the black clay squash a very matt "charcoal". The second batch, mainly of Watermelon bowls is packed and firing! 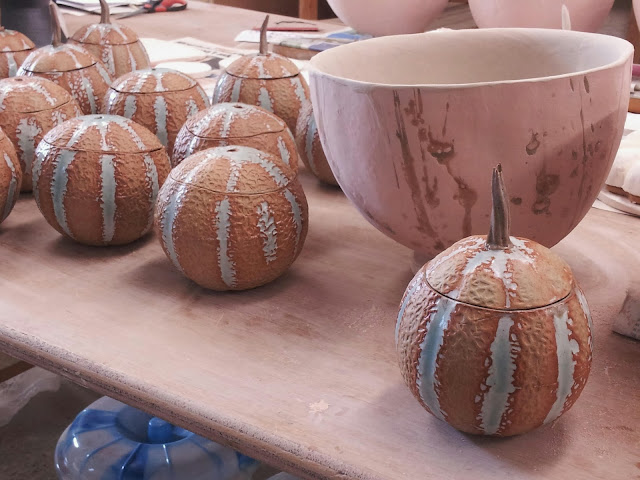 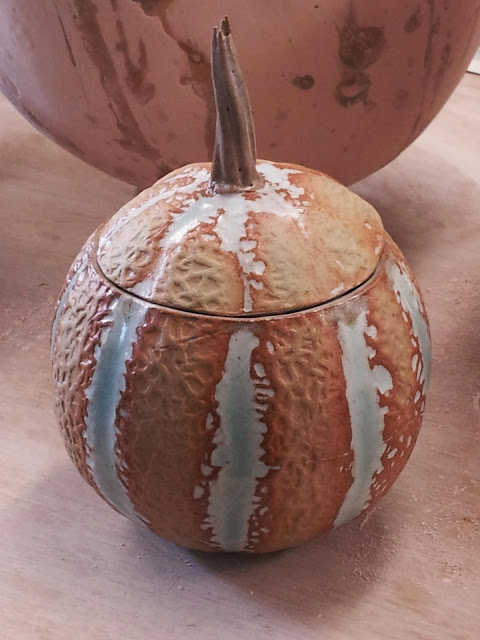 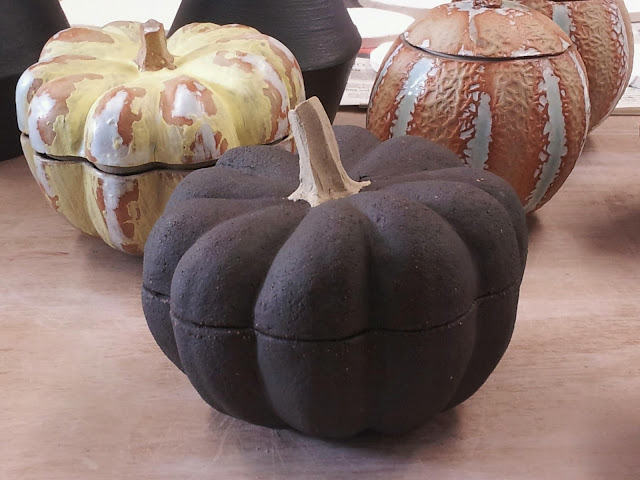 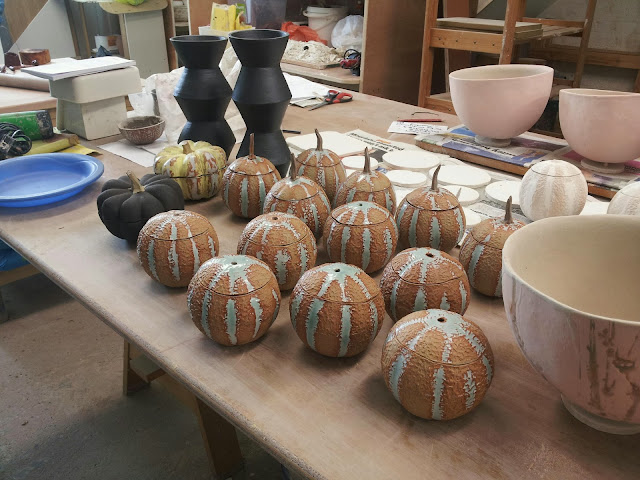